If you had visited the Simpson House the year it was built, you would have arrived by sea or by stagecoach, a 36-hour ride from San Francisco to Santa Barbara. The Civil War would have ended nine years ago, Ulysses S. Grant would be serving his second term of office, the railroad would not arrive for another 14 years, and there would be no electricity in Santa Barbara for 22 years.

Robert Simpson had emigrated from Scotland, and wife Julia Simpson from New York state. Their daughters, Mary and Margaret, were born in Santa Barbara when they purchased the city block that included the acre that was to be the site of their future home. In 1874, the Italianate Victorian was constructed with wood siding that had to be off-loaded from ships and floated to shore. Before the home was purchased from the estate of Mary, the last surviving Simpson daughter, in 1921, the family had seen the arrival of the railroad and the advent of the automobile, and enjoyed the comfort of electricity and indoor plumbing.

The new owner, E.P. Dunn, was the proprietor of the elegant and prestigious Arlington Hotel. Santa Barbara had long been established as a winter resort, and the wealthy had settled here and built large estates to enjoy the Mediterranean climate. The Arlington Hotel was reconstructed after the 1909 fire, only to be devastated again in the 1925 earthquake when its water towers collapsed and fell four floors to the ground, destroying the hotel. The Arlington Theatre now stands on its site.

The Simpson House survived the quake and, upon Dunn’s death, was purchased by Katharine McCormick, who had married into the McCormick family (of mechanical reaper fame) and also maintained their renowned Montecito estate, Riven Rock. Her husband, Stanley McCormick, was insane and lived out his years at his estate in Montecito. An independent woman, Katharine McCormick patronized the arts and research into birth-control methods. She used the Simpson House as a guest house and added the dining room, rear porch, and maids’ quarters.

After McCormick’s death in 1968, the property was willed to her personal secretary and confidante, Sarah De Laney, who sold it to the Thunderbird Development Company in 1970. Fortunately for the Simpson House, the next six years did not provide a healthy enough economic climate to justify being bulldozed and redeveloped, as it went through the hands of three development companies.

In 1976, when Glyn and Linda Davies recognized its uniqueness and purchased it as their home, the Davies family began their “labor of love” and undertook an overwhelming restoration of the main house. In addition, they tended the grounds and re-created the serenity and elegance of a Victorian jewel.

In July 1985, the Simpson House opened its doors as a bed-and-breakfast inn and was awarded a Structure of Merit award for its unique architecture and setting. In 1992, the Simpson House and gardens were declared a historic landmark. It is considered one of the best preserved and restored homes of the Victorian era in California.

About The Simpson House Inn

Pamper yourself during your Santa Barbara vacation by booking a guest room or cottage at Simpson House Inn.

Our adult only boutique hotel is nestled on an acre of English gardens and features 15 guest rooms that are in the Victorian Manor, Carriage Barn, or English Cottages. Our gardens have been awarded the prestigious “Santa Barbara Beautiful” Award. Housed in a Victorian estate built in 1874, Simpson House Inn invites you to relax with our perfect combination of historic charm and modern luxuries.

Every guest stay includes afternoon refreshments, an evening wine and heavy hors d’ouervres reception, dessert bites, and a gourmet served breakfast in the morning which can be served in the main house or in your room. 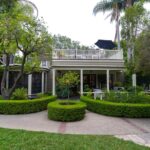 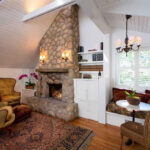